From Disney to the Brothers Grimm

Once again, my timing is off.

All spring I've been taking pictures and videos of the fox kits out by the old barns.

Should have posted some a while ago. The posts would have written themselves, right?

At their peak, I counted 7 kits. Running and pouncing and wrestling with each other. Cue the flutes and whistles.

That was probably around the beginning of May.

As they got older I began to see them all the time. I couldn't walk outside without interrupting at least three or four. They were everywhere.  Feasting on berries under the mulberry trees. Racing around the pasture. Darting in and out of the barns. I loved watching them.

They coexisted peacefully with the sheep. Each ignored the other. I started to believe that all would be fine.

Then life intervened for me and I lost track for a little while. By the time I tuned back in, the mood out by the barns had changed a bit.

At first the back half of a raccoon.

Then most of a second one.

Sometimes they'd be fresh and sometimes not.

One was the entire wingspan of a chicken. Ugh. I had to run to the coop to count mine, who were thankfully all there.

Usually, the carcasses were just lying out on the ground by the old barns.

Sometimes, I'd see them first from a distance. That sucks, cause what if it's a cat or a lamb? I always have to go check them out to make sure.

Sometimes, I just stumble on them unexpectedly. Now that REALLY sucks, cause, well, lets just say, there are no flutes and whistles in the background when that happens.

The groundhog was left in a stall in the pony barn. Um, thanks?

My apprehension went up a serious notch when I went out to check on the sheep one afternoon and found Devon, one of my Icelandics, sitting in the back pasture with bloody, fly-covered wounds across her rump. Like she'd been pounced on by a fox. The attacker was nowhere to be seen and clearly hadn't followed through with its attack, considering Devon was still sitting there, calmly chewing her cud in a very lifelike manner. I took her back to the barn, cleaned her up, sprayed her for flies, and she was fine in a couple of days, but still. Still. A fox attacked a grown sheep.

I worried about the lambs.

Especially Hamza and Helenka, the two bottle babies. They don't have any adult sheep to look out for them, just each other, and they're not a lot bigger than the foxes.

I started thinking about encouraging the foxes to move on.

I struggled with that idea. From what I gather, baby foxes don't move out of the home den until fall and that's still several months off.

I was still hoping for a Disney ending I guess.

Then I started to notice that the number of kits seemed to have declined. By the end of June I was seeing them much less frequently and I rarely saw more than two at a time. Maybe three.

A couple of days ago, I found, not one, but two different carcasses in the pony pens during morning rounds. They'd both been dead long enough that it was challenging to tell what they were. Raccoon? Groundhog? Fox?

I think they were foxes.

Sunday morning, mama fox (I'm pretty sure it was mama) got hit by a car on the road.

This afternoon I found yet another dead kit in the pasture.

Both yesterday and today, I saw only one fox each day.

I wish there was something I could do to save this one, but nature clearly is taking its course.

It looks like I won't need to worry about chasing them away.

But, geez, this is not how I imagined this little adventure playing out.

Someone reminded me that I haven't posted in a while.

I could say I've been swamped. Which is true, of course, but also not true.

The real truth is I've been too sad.

This spring, my family suffered a heartbreaking loss -- one of my brothers died.

He was only a couple of years older than me, but his health wasn't great, because of a vicious strain of arthritis that runs in our family (I don't have it.)  Years of arthritis meds had left his immune system compromised.

In early May he picked up a bug somewhere. Or maybe a mold. Or a fungus. The doctors never figured out what it was in his lungs that wouldn't respond to any of the antibiotics or other drugs they gave him.

He died in a matter of days.

The rest of us - my dad, his wife, my two surviving brothers - reeled. There is no other way to describe it.

This blog has never been about family, so I guess that's all I'm going to say now.

And now I've said it, I think, maybe I can get back to the business of blogging.

Got a lot to catch up on.
Posted by Tyche's Minder 6 comments:

By April, I thought maybe they had moved on after all.

I wanted to get a picture, even a crummy one, but invariably my phone was dead, or I'd put it down somewhere, or my hands were full, or wet, or she was long gone by the time I got my phone free.

But wait, I say to myself.

I was a little disappointed.

Until this morning as I passed by the old barns to let the sheep out.

And lookie there, it's not even mama fox, it's babies! At least three different kits.

In the spring sunshine.

Sparing you the worst of the phone photos, here are a few of one kit. You gotta look close at the last couple to see the tiny little guy. 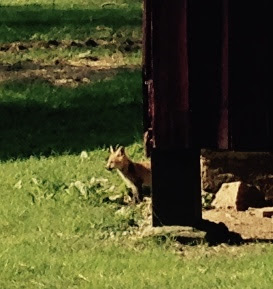 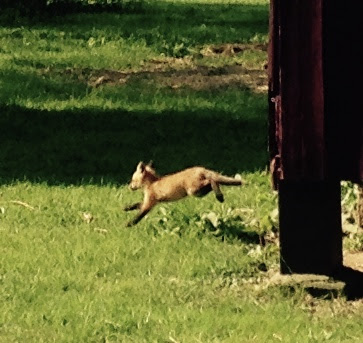 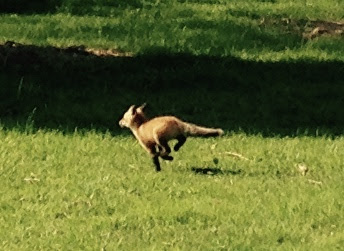 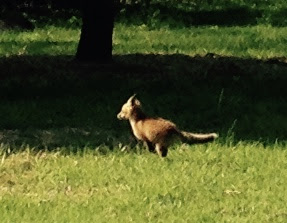 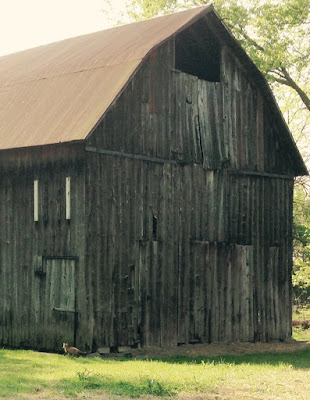 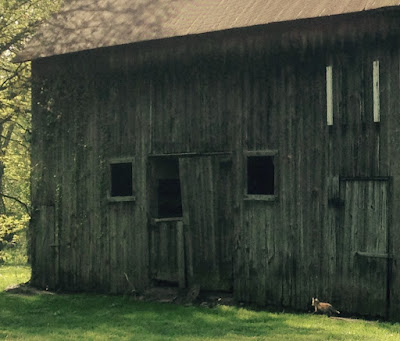 It's a hard life


Yesterday was the flocks' first day out in the big pasture. The lambs went with them. So did the rams.

By the end of the afternoon they were all tuckered out.

Blogs more interesting than mine